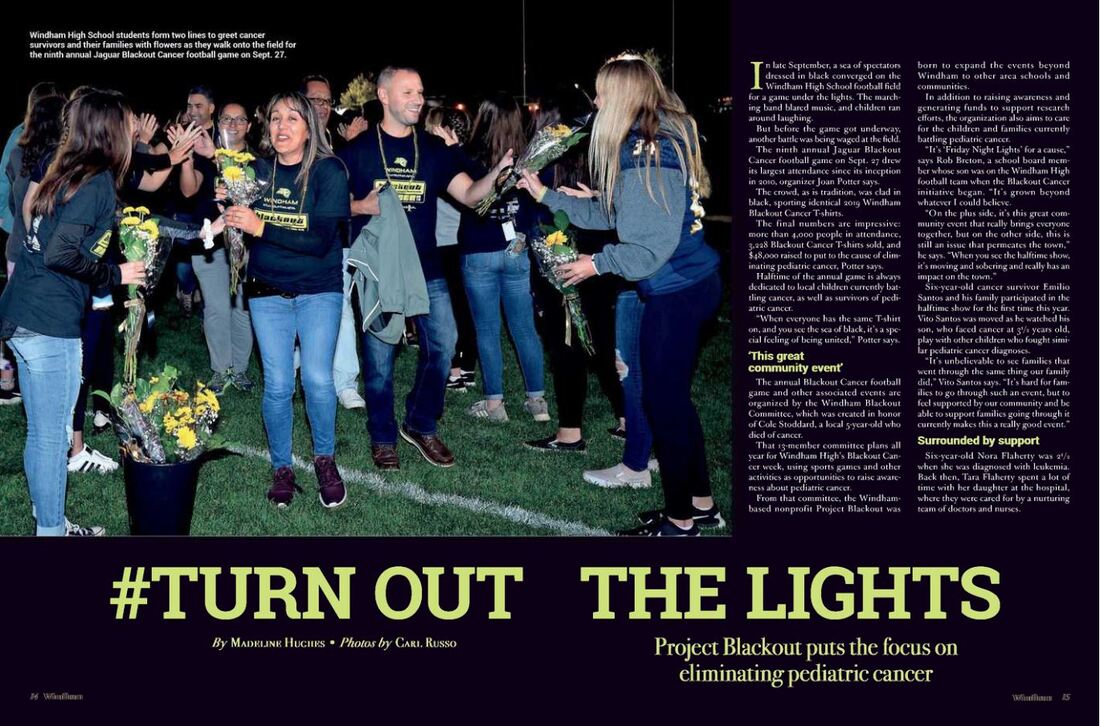 Windham, NH – November 27, 2019 – Windham-grown Project Blackout today announced that the series of 2019 Windham Blackout Cancer Week events around the town generated unprecedented awareness of pediatric cancer and raised more than $48,000 in funds for research and support efforts. All proceeds of the town-wide effort will go to pediatric cancer research at Children’s Hospital at Dartmouth, Sophia’s Fund, and Windham Helping Hands Pediatric Cancer Fund to help care for the children and families currently battling pediatric cancer in Windham.

“We are so thankful to have such an amazing community at our side during such a trying time for our family,” said Tara Flaherty of Windham. “It was so meaningful to see all the people in Blackout Cancer shirts around town and such an emotionally touching student-led tribute during the football game. It has been an overwhelmingly powerful source of strength and encouragement as we take on the pediatric cancer fight.”

Another record year, more than 3,225 Blackout Cancer t-shirts were sold this year and over 4,000 people attended the 9th Annual Jaguar Blackout Cancer Football Game at Windham High School (WHS). Residents of all ages sported both their 2019 t-shirts and designs from previous years to show their support throughout the week at games hosted by WHS and Windham Middle School (WMS) athletic teams. Students from all Windham schools and area preschools also collected small toys that were delivered to children at Floating Hospital for Children at Tufts Medical Center.

Annual events like the kickoff party at Old School Bar & Grill and ladies night fundraiser at Friendly Red’s Tavern continued to generate sellout crowds. In addition, workout fundraising events, a pep rally at Fody’s Tavern and a more extensive “Taste of Windham” tailgate featuring local restaurants and food trucks made their debut for the 2019 effort to involve more local businesses than ever before.

Started as a community service project by the WHS football team in honor of Cole Stoddard, who died of neuroblastoma at the age of five and is the son of Golden Brook Elementary School teacher Michelle Stoddard, Project Blackout has now raised $150,000 via the annual Windham Blackout Cancer Week activities and is rapidly expanding to other communities across the state.

Growing Lineup of Events Sponsored by Local Businesses Support Pediatric Cancer Awareness and Raise Critical Funds
Windham NH – September 17, 2019 – Windham-grown Project Blackout kicks off a series of events around the town to generate awareness of pediatric cancer and raise funds to support research efforts and care for the children and families currently battling pediatric cancer in Windham. All proceeds of the town-wide effort will go to pediatric cancer research at Children’s Hospital at Dartmouth and Windham Helping Hands Pediatric Cancer Fund to help families in town.

The hallmark Windham Blackout Cancer Week event, the 9th Annual Jaguar Blackout Cancer Football Game, will be held under the lights at Windham High School (WHS) on Friday, September 27, 2019 at 7 pm. Thousands of Windham fans will be wearing their 2019 Blackout Cancer t-shirts as a sign of solidarity to raise pediatric cancer awareness. There will be a dedicated student-led performance at halftime honoring the Windham children and families affected by pediatric cancer. Family friendly tailgating starts at 5 pm, with various local restaurants and food trucks offering a “Taste of Windham” for purchase before and during the game including Deli King, a Fried Dough Truck, Kona Ice, the Lobster Tail, a Taco Truck and Walking Food Gourmet.

Sponsored Windham Blackout Cancer events kick off tonight with the Second Annual Ladies’ Night at Friendly Red’s Tavern. The 21-plus sold-out event will include a mix of trivia, door prizes and wine tasting. It will also be the first official stop of the “Blackout Traveling Raffle” that includes a mix of coveted prizes and gift cards donated by Windham families and local businesses. The traveling raffle will then be featured at the select events leading up to the final raffle and drawing at the football game.

Planned events with a varied lineup of raffles, prizes, live music, karaoke and activities include:
New this year, Fody’s is supporting Windham Blackout Cancer through the end of the month. In addition to donating proceeds from the pep rally event, Fody’s is actively promoting pediatric cancer awareness and encouraging all guests this month to “round up” for the cause.

Windham athletic teams will also dedicate games to pediatric cancer throughout the week. The current game schedule is as follows:
For further details and a complete list of events, please visit the Windham Blackout Cancer Week Facebook Page. Supporters are encouraged to wear their Windham Blackout t-shirts from years past to the events and around the town to raise awareness.

“Windham Blackout Cancer week was even more special this year as the t-shirt logo was created by students in the Graphics Arts class at Windham High School,” said Superintendent Langlois. “The blackout t-shirt is an important symbol of unity and it is even more impactful coming from the students.”

Schools and businesses throughout the town hosted events during the week to bring the community together and raise funds honoring Cole Stoddard, who died of neuroblastoma at the age of five. Cole is the son of Michelle Stoddard, a first grade teacher at Golden Brook Elementary School.

The hallmark event of the week was the 7th Annual Jaguar Blackout Cancer Football game where the community lined the stands and fields to watch their hometown team play and to honor Windham cancer families.

“Until you’ve attended a Blackout Cancer football game it’s hard to imagine the magic that happens there, “ said Bill Raycraft, WHS Athletic Director. “Long-time friends connect, entire families bond, and everyone feels the love of our cancer families at the half-time show. This is a community event with an important charitable purpose that everyone looks forward to.”

Over seven years, Windham has proudly raised $111,000 for cancer. Proceeds from this year’s events will be donated to pediatric cancer research, Windham Helping Hands Cancer Fund and Childrens Hospital at Dartmouth (CHaD).